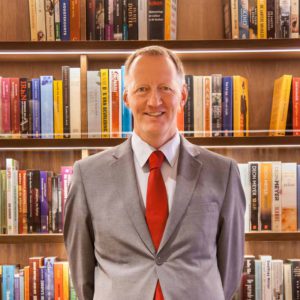 The Ambassade Hotel is renowned as the place to stay in Amsterdam for writers. All the big Dutch publishers book rooms here for their authors – much to the gratitude of the hotel, which has been able to assemble an amazing book collection thanks to all its literary guests. The library currently holds an astonishing 5000 signed books offering a cross section of the entire range of contemporary literature.

The books are housed in the Library Bar and Library Lounge, which were completed in 2015. The person with responsibility for the library is Eelco Douma, who has been working at the Ambassade Hotel for 25 years. He’s proud of the collection and well aware that it wouldn’t have been possible without the publishers.

‘It’s extraordinary how the collection has developed. Publishers traditionally had their offices on Herengracht, and they book rooms with us for their authors. The hotel always receives a signed copy of their latest work. Because the writers keep coming back, from some of them we have their entire oeuvre. Take novelists like Arnon Grunberg and György Konrád for instance, or non-fiction authors like Ian Buruma and Philipp Blom. We have work by authors from 76 countries, and our Belgian neighbours in particular are close to our hearts. Tom Lanoye and Dimitri Verhulst are regular guests, for example. Verhulst actually devoted two pages to us in his book to mark the 2015 Dutch literature week!’

In the Library Bar there are also 20 guestbooks with valuable contributions and reflections by famous guests. ‘They include internationally renowned writers, among them virtually every winner of the Nobel Prize for Literature over the past 30 years, as well as politicians, philosophers, and even a balloon pilot. There are various notes in the guestbooks by authors like Isabel Allende, Salman Rushdie, David Sedaris, Connie Palmen, Eckhart Tolle, Mario Vargas Llosa, Umberto Eco, and Jonathan Safran Foer.’

‘The writer and former chief editor of the magazine Vrij Nederland, Rinus Ferdinandusse, used to come to the hotel sometimes to interview a guest, and one day he said, ‘Do you know who’s sitting over there in the corner of the lobby?’ It turned out to be John le Carré, whom we hadn’t recognised because he’d reserved under his real name, David Cornwell. From then on, Le Carré stayed here regularly. I still have a handwritten letter from him thanking me for the Christmas gift we send him every year and saying he has such ‘fond memories’ of the Ambassade Hotel. I’ll always cherish that letter.’

‘Just before my time, though from the stories it sounds very impressive, there was a visit from the famous writer Alberto Moravia, éminence grise of Italian literature. It was as if the Pope was visiting, he was given so much attention and respect. Things are different these days; the top Italian author today, Paolo Giordano, is very relaxed and greets me like an old friend when he stays with us.’

‘Something that made a big impression on me a year ago was a visit by Nadya Tolokonnikova of the punk band Pussy Riot, who was here because of her book ‘How to Start a Revolution’. Usually I wouldn’t take such a liberty, but when I saw her sitting in the library I went up to her and said that I think she’s extremely courageous and she should keep up her fight.’

The writers’ hotel:For a period of six months, a different author is invited to stay at the Ambassade Hotel for two nights every week. The author will write a column about their experience of being a writer in this era. The columns will be published weekly
in the Dutch newspaper ‘Het Parool’.