Aaf Brandt Corstius (b.1975) is a columnist for
publications such as de Volkskrant, Margriet and
Flow. She has previously published books including
The Year that I Turned 30, Handbook for the Modern
Woman and Finally 40. She writes plays for mugmetdegoudentand,
and is currently performing the solo
performance Welcome to My Pitiful Youth. She is
married and has two children and two step-children. 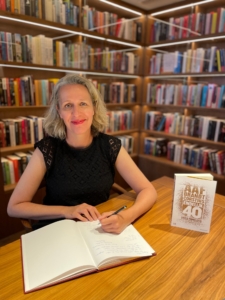 I travelled to the writers’ hotel, a trip that’s twenty minutes by bike. But with two bags and a yoga mat hanging from the handlebars and in a sultry thirty degrees, it felt like a real journey. Just before, I’d read an interview with the famous American thriller writer David Baldacci. Coincidentally, he disclosed what had happened to him in that same writers’ hotel.

David Baldacci had stayed there in 2001, just after September 11th. The world was teetering, he felt fearful; Baldacci lay awake at night, tormented by those thoughts and the jet lag, I’d imagine, when he heard someone on the canal outside, ringing a bicycle bell.

That prosaic sound made Baldacci suddenly realise that the world was still turning, everything would perhaps work out all right, because bicycle bells were still ringing, etcetera. ‘Someone rides a bike and rings a bell. All is well. Life goes on. That tiny bell ringing in Amsterdam gave me a little hope again.’

I’d never read anything of David Baldacci’s, but the story won me over. I also immediately knew for sure that he was a good writer, even if he perhaps didn’t write the sort of books I’d buy (his latest book was called A Gambling Man and was about ‘A corrupt politician, a femme fatale and a private eye who didn’t back down for anything or anyone’). The fact that you hear a bicycle bell and then conclude that life will go on is very beautiful.

It was sometimes rather difficult to hear a bicycle bell during Corona.

While a pandemic like this at first seemed to be quite a source of inspiration for a columnist like me (Excitement! Sensation! Virologists! Face masks! Covid crazies! Vaccine! — the story wrote itself), at a certain point I really very badly wanted to hear a bicycle bell ring, and to incorporate that into a piece.

To really write something hopeful, that’s what I was longing for, and not in the sense of ‘This is the big re-set’, or ‘We are all going to learn so much from this’ (we already know that isn’t true), but just to write something in an original way that gives you a lift. That was pretty difficult.

Now, I was lying in the same hotel as Baldacci, maybe even in the same room, because I was looking out onto the canal, and I was also awake in the middle of the night. Actually, I was suffering from such an acute form of hay fever that I’d just googled ‘Can you die of hay fever?’

Outside, life had finally started up again. The terraces were open, people were watching football together.

A sloop drifted by on the canal; judging by the sound of it, it was ferrying ten or so heatedly talking drunken people, who were playing loud, pumping music. It would usually have irritated me.

But now they were my bicycle bell.