Abdelkader Benali (b.1975) writes novels, poetry,
drama and journalistic pieces. His work, which has
been published internationally, was awarded the
E. du Perron Prize in 2010, and in 2020 the prestigious
Golden Goose Quill. 2021 saw the publication of his
4 May reading, The Silence of the Other, which he held
in Rotterdam. He is currently working on a new novel. 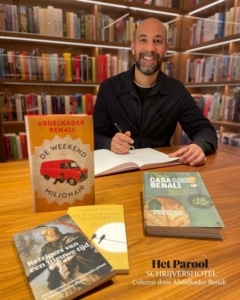 The first time that I came to the Ambassade Hotel was with the Indian writer, Kiran Desai. She was the daughter of the famous writer Anita Desai, whose books were published worldwide. The talent proved to be hereditary, because her daughter’s debut appeared from my publisher, Vassallucci. I was asked if I’d have a conversation with her at the Bijenkorf department store. Fine!

We met at the Bijenkorf. To my great surprise, Kiran Desai was wearing an Indian sari and matching sandals. She had well-kempt toes. I felt terribly underdressed. Was I expected to come in a Moroccan djellaba?

The conversation went smoothly. Kiran Desai answered everything beautifully, as English-language authors tend to do — I suspect that only authors who can speak in complete sentences are eligible for translation. Afterwards, we walked to the Ambassade Hotel, where she was staying. While she strode across the canals, my eyes flitted to her toes. Weren’t they
cold?

It was warm in the Ambassade Hotel. After she’d signed her novel, it was placed on one of the bookshelves. My publisher, Oscar van Gelderen, told her how all visiting writers stay at this hotel. It was a writers’ hotel. Later, a foreign writer would tell me that Amsterdam was the best city to come to and to leave again. I intuitively understood what he meant. The city is small, compact, and free-spirited. And when you leave, you know that when you come back again you’ll find everything the way you left it.

And then it was my turn to sign my novel for the collection. When I was added to the ever-growing arsenal of novels, I joined all those other authors who had donated a book to the hotel. By now, the hotel must have the biggest collection of signed books in the world. Not long after, I spent a night at the hotel. The publisher offered me this because the next day I would be in conversation with a visiting author. The receptionist who brought me to my room told me that Cees Nooteboom had also spent the night in the room. I hoped that our stays wouldn’t coincide. The room was empty. Cees Nooteboom was elsewhere.

The next morning, I was sitting at breakfast. I copied what I do at home as best I could. I always eat a slice of bread with peanut butter, a slice with cheese and a slice with jam. Sometimes also a slice with Nutella chocolate spread. I’ve followed this morning ritual for more than twenty-five years. I drink two cups of coffee, sometimes more. Muesli, fruit and omelette look tempting, but I skip them now because I can’t give up my ritual. Sleeping alone goes well; having breakfast alone in a hotel goes less well.

The last time I spent the night at the Ambassade Hotel, I was seated next to a German couple with two children. The children had enormous appetites. They ordered crêpes and eggs, as if there were no tomorrow. An appetite you’d like to applaud.

In 2006, Kiran Desai won the prestigious Man Booker Prize for her second novel. Since then, she hasn’t published any more books. I still sometimes think of her toes. Well-kempt toes.