Annelies Verbeke (b. Belgium, 1976) debuted with
the international bestseller Sleep! (2003). Her work
has been published in twenty-five countries and has
frequently won prizes, including the F. Bordewijk
Prize, the NRC Readers’ Prize, the Opzij Literature
Prize (for her novel Thirty Days), the J.M.A. Biesheuvel
Prize, the Cutting Edge Award (for her short
story collection, Hallelujah), the Flemish Debut
Prize and the Golden Dog-Ear. 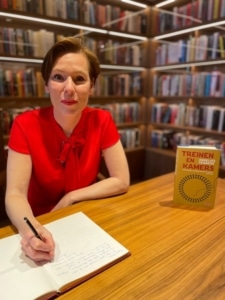 In March 2020, I was supposed to be a guest at the Cairo Literature Festival, together with my colleague, Ali Bader, and my first Arabic translation. The festival was postponed, and then cancelled — like so many.

It was a consolation that my Thirty Days was recommended on the main table at one of the
best bookstores in New York. But immediately after — Trump, super-spreaders, exponential growth, leaking loading spaces — the bookstore had to close its doors. But, before I could start to grumble about that, I lost my favourite New Yorker: my eighty-fiveyear- old mentor and friend, Milena Jelinek was struck down by the virus, and five days later, she was no longer here. We saw each other almost every year on a Greek island, and I visited her twice at home. Her sense of humour, her intelligence, her melancholy, her light, her sensational life. When I was twenty-five, she saw that I could do something, that I was someone, and she continued reading me in English and Czech. We recognised each other as ‘lone ants’ — her words. We never said goodbye.

After that, one of my best Belgian friends died. It wasn’t a good time to go into hospital for those who were already seriously weakened. He was so sensitive and dark, I still used to meet up with him, we often phoned. His voice. Grief frequently springs upon me like a wild animal.

I finished off my Trains and Rooms, suppressed my panic about four months without any income, enjoyed the time that I crossed over the Dutch border, semi-clandestine, to see the editor, Ad, a friend and colleague, Inge, and the people from Wunderbaum, the actors’ collective that I often write for, people that I travelled with. I saw their Work Harder, and by the end, I was floored with emotion: Wine Dierickx, in a clown’s nose, rides the ‘horse’ Matijs Jansen — slow, heroic, splendidly lit: the arts and their power, their courage in barren times.

It was disconcerting that an actual border had suddenly arisen between Belgium and the Netherlands. And yet, new Dutch friendships began within my walls — long live WhatsApp. Together with the writers’ collective Fixdit, we decided to raise the profile of the work of female authors in the canon and the literary field. During my stay at the Ambassade Hotel, Jannah Loontjens and I recorded two Fixdit podcasts, one canal further along. I’m so happy to have got to know her and the other Fixdit women (better). There are times for standing still or moving, ending or beginning — that remains.

And while I enjoy my dessert that’s brought by room service, and listen to the voices on a little boat in the canal, I think of something that Ali Bader once told me about our lifestyle: ‘We are poor people who live like rich people.’ Today, yes. Tomorrow, we’ll see.