Arnon Grunberg (b.1971) is a widely discussed
writer, essayist and columnist, with numerous
publications in diverse newspapers and weekly
magazines. His novels are often nominated for and
awarded prizes, and have been translated into thirty
languages. Prizes for his oeuvre include the Constantijn
Huygens Prize and the Golden Goose Quill. 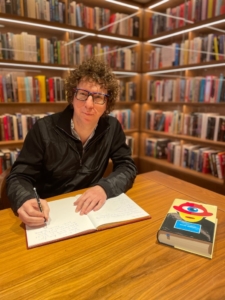 Actually, I wanted to include this quote by the German philosopher Walter Benjamin, who committed suicide on 26 September 1940 in Portbou, as the inscription of my new novel, but it even better suits a series of stories about the Ambassade Hotel in Amsterdam and thus, indirectly, all hotels, and the hotel existence itself.

How are we meant to understand an eternal homeland in the context of the love of one person? Could all nationalism be a sanctuary for people who sought in vain for their eternal homeland in one person, and when that ended in disappointment, turned to the country they happened to have been born in? Setting aside the question of exactly what love is eternal.

Presumably, it’s good to separate passion, which is eagerly consumed in hotel rooms, from love, which seeks its refuge sooner in living rooms and bedrooms, vestibules and storage spaces. It’s a human peculiarity, and a tragic one, to confuse passion with love, just like we wish to believe that freedom and equality are the same thing, or that one at least leads to the other.

It isn’t only in love, but in writing, in life, that I’ve found eternal voyaging. Where ‘eternal’ doesn’t need to mean anything more than life-long.

If love is bound up with a need to find a home, whatever that word may mean, and with the desire to travel, which by necessity means that one has to leave the metaphorical homeland, then it is inevitable that the hotel is a symbiosis of travel and home, heimat and exile. And thus, a compromise, but also a catalyst. This desire wishes to cross borders, and it is precisely the borderless character of the hotel that encourages us to do so.

Borderless, because the hotel is a halfway house. Room 93, Room 18 — we call them our rooms, but in a few days, someone else will be living there.

It’s theatre, just like the restaurant is theatre; everything is a ritual, certainly in a hotel, but the ritual has a high degree of reality. It transports us towards life, towards
the sensation of mortality and the transitory, which is presumably a precondition for being able to desire an eternal heimat in the first place.

The painter Charlotte Salomon, who was murdered in Auschwitz on 10 October 1943, posed the question: ‘Leben? Oder Theater?’ The hotel as institution, as reception centre, as hospital, as sanctuary, as guilty place and safe house, as a church and, lastly, as an illusion (the rooms of the other guests contain the lives that we might have lived). And the answer: Leben und Theater.

Alma Mathijsen
Scroll to top
Curious about our tips for favorite spots & activities in Amsterdam?