Daan Heerma van Voss (b.1986) is an historian and
writer. He was awarded De Tegel for his journalistic
work. His literary work has been nominated for
various prizes, and translated into Swedish, Spanish,
German and Chinese. In 2020, his Corona Chronicles
was published. His new book The Anxiety Project
was published in the spring of 2021. 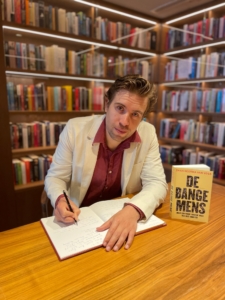 A Confession Left in the Margin

Fine, we’ll start over. The first version of this piece has been rejected — a forced literary reflection on the kindred spirits of the writer and the hotel (something about being in transit and unknown doors), with a Cees Nooteboom sauce over it, and dusted with Arnon Grunbergian sprinkles about not having a heimat. And voilà.

Things turned out differently. I had books with me, a notebook, a laptop, but I was no writer. I was a twelve-year-old boy, with acne, on the verge of the big growth spurt. A young boy who had done something terrible.

I’d been working here for one afternoon. Thanks to Lucas, a holiday friend. Lucas, his little brother Louis, and I were playing football, scuffing along the canal-side and kicking snail-shells. Their father, Wouter, was always sitting on the quayside. Beside him, books. Philosophy books, Buddhist books, books about stones. Wouter was ‘the boss’ of an Amsterdam hotel. And I was allowed to help out for the day, if I liked.

Lucas led me round; he sometimes admitted that maybe sometime, when he was grown up, he’d take over the hotel. I wanted to do everything well, didn’t want to disappoint Lucas, nor Wouter, the creaking stairs, or the CoBrA paintings. I’d been let in to a tradition of butlers and bell-hops, of supervisors and honourable carers. It didn’t go terribly well. The windows that I washed with a thick yellow cloth didn’t turn translucent. The breakfast tables that I’d laid never seemed entirely symmetrical, however often I shifted the butter knives. Well, anyway, that’s when something really went awry.

An American man — a travelling salesman? A spy? — asked me if I could carry his trolley suitcase. I placed the case beside his bed. One click. I opened my sweaty fist and I saw a scrap of plastic — a clasp, a lock? When he wasn’t looking, I laid it back in the right spot, hoping that he didn’t see me. He gave me two-fifty as a tip, but I declined the honour.

Oh, what honour? Something had been placed in my care for safekeeping, something important, and now it was broken. I was furious, hurt. I have no idea what I said to Lucas, to Wouter, no idea what I gave as a reason why I wouldn’t be staying on beyond that afternoon.

He’s still pottering around here, Lucas. His hands folded proudly behind his back. He’s the boss, as his father once was. And I sit on the terrace on the canal-side, thinking of that man who’d once sat on the quay — him with his books, me with my notebook.

What is a writers’ hotel? A place to arrive, to think about people you no longer speak to, to experience how we’re all passers-by. A place you can call your own for a little while, until you hand back the key to someone who smiles at you, forgivingly.

PS: To the relevant American spy agency that reads this: tell your colleague that I’m sorry about his case.