Esther Verhoef (b.1968) is one of the most successful
and versatile writers in the Netherlands. She has
sold some 2.4 million copies of her psychological
thrillers and novels. Verhoef’s work has been published
in numerous countries and has been nominated for
and won prizes on numerous occasions, including
the NS Public Prize, the Hebban Award and the
Golden Noose. 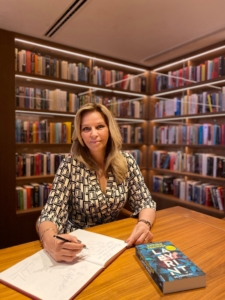 The Shutters Are Closed

‘All of us have increasingly turned inwards,’ my writing friend says. She gestures as if she’s closing shutters in front of her face. ‘Everyone on their own little island. Furtive, frightened of the drifting bacteria on the breath of others.’

I sit opposite her with a big glass of Chardonnay. My second. The stricter the rules get, the higher my drinks tab. My friend is in a high-risk group, but now she’s had her second jab, and I’m just recovering from two weeks of last-minute Corona. So, it’s all allowed again now. We even hugged — faces turned away, because you never know.

‘I’ve transformed into a hermit that dreads human contact,’ she continues. ‘Someone who has to re-learn how to welcome guests. Didn’t that go quickly?’

I nod and take a sip. And another. I’ve always escaped into my writing, every day since I was eight; disappeared behind words and sentences, absorbed in a world that you create yourself, and that you can understand and control.

‘There are some people who I haven’t seen for a year and a half,’ I say. ‘You know, friends who you go out to a film with for the discussion afterwards, or you like to go shopping with, or go out to lunch with at some hip place.’

And at a certain moment, you don’t dare to invite anyone anymore, I think, because one of them will clasp you to their chest as you come in, snorting: ‘You don’t believe in all that nonsense, do you?!’ And another will promptly give you the cold shoulder just because you want to have two guests, while Jaap and Mark from the government advise only one.

I didn’t even message my firm, casual friends. What are you supposed to ask? Is everyone healthy, are you all managing there? I miss them, and then again I don’t. I’m no longer used to people, I think. My house’s shutters are closed, and so are my heart’s a little.

This must be an ideal time for writers, I keep reading everywhere. Because they were already sitting at home the whole time, typing. Nothing’s
changed for them. But for me, everything’s changed. I write in seclusion. Four or five days without social contact is normal. So now and then I need to get out to make sure I don’t end up babbling under a stone. Hopsy, off to a café, a restaurant, the shops, a festival, places where you can tap off a few drops of social structure as an antidote. And hear a story or two,
input for your work.

But everything is fully booked up, or regulated to death, and people have gone stark-raving mad, screaming at the tops of their voices at each other on either side of a ravine, where you could once have found the safe, middle ground.

Rapprochement — I hope that we can learn that again. Houses and hearts open, understanding, nuance and trust. A new, firm foundation in that middle ground, that’s what I wish for the reader, the writer, each and every person.

And until then, there’s always Chardonnay.

Jessica Durlacher
Scroll to top
Curious about our tips for favorite spots & activities in Amsterdam?