Hanna Bervoets (b.1984) has written seven novels
that have been awarded prizes on a number of
occasions, and have been translated into various
languages.
In 2017, she won the Frans Kellendonk
Prize for her oeuvre. Her first collection of stories,
A Modern Desire, was published in 2021. 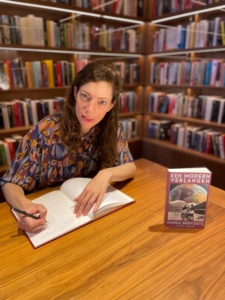 So what’s going to happen with fiction, I wondered, when the pandemic broke out last year. It was a luxury question from a luxury position; while others saw their lives changing drastically, I did what I’ve always done: I sat at home writing.

But what to do about Covid? What role would the pandemic play in the modern works of scriptwriters, advertisers, and writers like me?

The question aroused both fear and excitement.

Because we, story makers in the widest sense, once made an agreement, signed an invisible contract with our audience. If the story represents the present, we must more or less portray the present faithfully for the sake of the credibility of the story. If my character walks over the Mercatorplein, I’m thereby implying that we are in Amsterdam. Here, ‘the present’ is a broad concept. It could be today, but also tomorrow, last week, or roughly two years ago; every narration is contemporary until the opposite is proven true.

My excitement of last year derived from the idea that this could now be over and done with. Anyone who wrote about a world without face masks and press conferences was writing about a past (but which one?), or about a future (but when?) — at least according to the terms of the invisible contract that states that the present in fiction represents our own present.

But meanwhile, I see story makers more and more frequently break this contract.

A new, parallel present then.

In the series Good Times, Bad Times, Ludo and Janine are always busy in December, faithfully hanging up Christmas decorations. It’s our Christmas, too, is what they are telling us: we share a present!

But last year, I didn’t see Janine make any effort at all to keep one and a half metres away from Laura — who is, after all, in a high-risk category. Suddenly, the soap series wasn’t representing a past, or a future, but an entirely new parallel present, a ‘now’ without Covid.

Not every series chose to do this. There is a scene in the new police series, Mare of Easttown, in which the detective Mare is looking at the pixilated video images of an interrogation. Towards the top of the monitor screen, I noticed a date: February 2020.

Suddenly, I saw the director panic: which date should the screen show, it was impossible for his series to take place after March 2020 — okay then, February 2020 it is, that’s just about believable, right?

Yes and no. This date gave the series an unintended extra pregnancy. I already knew as a viewer that in about another month, these characters would be busy with entirely different things. A murder case? Whatever. The end of the world was approaching. Because of the subtle time stamp, their daily worries suddenly felt relative, maybe even futile.

So, they understood things better at Good Times, Bad Times. The contract that was once agreed between the story maker and the audience ran out halfway through the pandemic. Maybe that took place so quietly because its foundations were never that strong: it condemned us to the lie that stories are about the now, while, without exception, they are always made in an utterly naive past.