Jeroen Thijssen (b.1959) is an historian and writer.
He lives in ’s-Hertogenbosch. At the publisher Nieuw
Amsterdam, he has published Johannes van Dam:
The Biography (2018), The Hidden Village (2019),
and the novels Solitude (2014) and Hazer (2017),
as well as the novella The Return (2021). Books by
Thijssen have been on the longlists of the Libris
Literature Prize and the Brusse Prize. 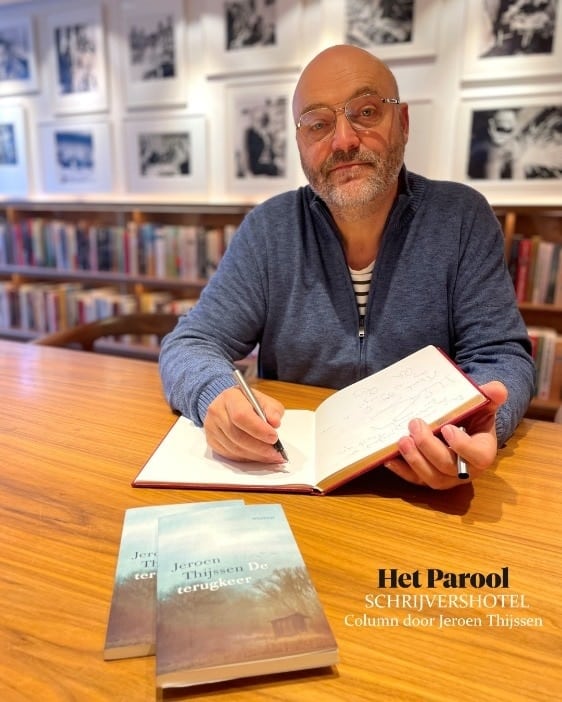 Viewed from the Terrace

A young woman is walking on the other side of the Herengracht canal, with a candy-cane-pink hairdo, and a little dog on a leash that’s dragging its feet. The dog is wearing a white suit, with an Elvis collar. Its firm balls dangle from its long johns.

That’s a strange name for a dog. Maybe the animal is in transition. That’s the way big city life can be.

Many dogs around here are carried by their owner, probably handicapped animals that can no longer walk. In Paris, dogs have their own vagrants. Cats live in apartments with their private valets. Even pigeons have privileges, with their luxury apartments above the roofs, and daily catering on the street.

But over the last year, pigeons have been through a tough time. The tourists have stayed away, with dramatic results: no tourists, no pigeon catering.

That’s a business model with defects.

Writers also have a comparable business model. They sometimes write a book, they sell a few copies of it, they read from it. It doesn’t generate much money, but that’s merely incidental. They receive prestige and satisfaction as their psychological fee.

But suddenly, an invasive virus brings the whole world to a halt. Bookshops close, libraries close too, all podiums are shut down. And so, the psychological
fee disappears too. And the income, however modest that may be.

And there you go with your business model. It had been dealt a few vicious blows already by the first Rutte government. Minister Halbe the Destroyer, later better known as Halbe the Liar, his name generating the grinding of teeth.

Their disdain was even worse than the financial cuts. ‘Art is a hobby,’ said Minister Wiebes, who has also departed now. The government shouldn’t set aside money for hobbies, everyone ought to be able to pull their own weight.

His excellency often seemed to be a sound hole for his party, the conservative VVD.

For the sake of convenience, the sound hole forgot that the same government does actually subsidise other hobbies. Olympic swimmers, gymnasts, Keirin cyclists all receive an income from the government, which is so generous it enables them to get a mortgage.

Try saying that about artists. They get a kick in the teeth for their ‘hobbies’. Even the king prefers sport to reading.

And then you get a f***ing pandemic on top of it. Book sales gone, appearances gone, and afterwards, see above. The prestige that is already damaged now totally goes down the drain, together with the satisfaction and the most minimal of incomes.

The dog across the canal is now doing things that a human would use a toilet for. The owner keeps an eye out, and quickly walks on when she imagines she hasn’t been spotted, The dog trails behind her.

The lonely writer on the Ambassade’s terrace, on the far side of the Herengracht, goes up to his luxurious room, where he’s been given two nights stay. For nothing. Because he’s a writer and his hobby is more than a pastime, it has significance. Luckily, there are still places where they realise that.