Jessica Durlacher (b.1961) has written novels that
include The Hero (filmed and awarded the Opzij
Literature Prize), Conscience (awarded the Debutant’s
Prize and the Golden Dog-Ear), The Daughter
(nominated for the NS Public Prize) and Emoticon.
Her new novel, The Voice, was published in 2021. 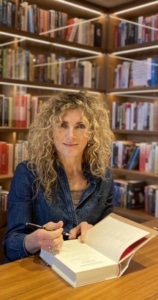 Writing in the Time of Corona

I recently happened to be a guest as a writer in Amsterdam, at the Ambassade Hotel, in one of the finest locations, facing the former Institute of Dutch Studies, where I once started my degree. I
was amazed at how polished and gleaming the city can be, and how naturally it can conceal itself in the disguise that it probably displays to strangers.

Amsterdam is the city that I think I know best of all the cities I’ve lived in. I was born there, and spent the first thirty years of my life there. I studied and worked there, and it’s where I experienced all kinds of firsts. When I think of the city, or when I’m there, I always feel homesick — not for any places, but for moments, or periods. Amsterdam is a tin-full of madeleine cookies, a map of significant moments, a time machine. At the time, I could no longer see the city because I was a part of it.

But even now that I live elsewhere, the city feels like my own territory, homesickness territory, although I did still often go there before Corona. Time breaks apart memories, but it sometimes sticks them together too. Until a few weeks ago, the year and a half behind us seemed as though it were composed of all the same time, the same week, the same hour. I could remember every hour, every thought, I was present everywhere.

We were all furtive, introverted people without much life outside the house, we hated our masks with a similar passion, each day we briefly and dejectedly lowered our expectations; there was little stimulation, pleasures were close to home, there wasn’t much for us to strive for because the chance that others were having a much better time was reassuringly and depressingly small.

This was all one time, and it was called Corona. There was little to cheer us. Never had a long year felt so monotonous, the passing of time so visibly unaffected by what we found important. We watched the hours, the days, the weeks and the months pass
like never before.

Meanwhile, it now seems that we can pass into a new age; the gate is open, they’ve once again taken our possessions out of the safe for us. Awkwardly, we stick our noses into the fresh air, the open shops, the cafés and the museums. The light still stings our eyes a bit, our social muscles are a little wasted, and we react to most things that happen to us with a mild shock. Are we the same as we were before?

The Corona year may have crumpled our memories into a wad; the gaping gap between the time before the pandemic and now has grown exponentially. My wardrobe looks like a stranger’s. Who was the ‘I’ that wore such awkwardly high heels?

Amsterdam (and we) have acquired a whole new history, but I do wonder whether this time it will arouse any homesickness. Maybe just for the Ambassade Hotel.