Maartje Wortel (b.1982) was born in Eemnes.
She was expelled from the School of Journalism
because she ‘invented too much’. Meanwhile, she
has grown into one of the most distinctive writers
of her generation. She has written numerous books,
including Ice Age and Dennie is a Star. Her latest is
The Groove. 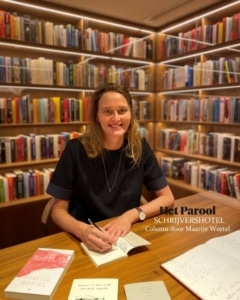 A writer I’m friends with told me that if he was offered a commission, he asked himself whether two of the three Ps could be ticked off. Sorry? I asked. I love language and the individual letters and even DADA, too, but I wanted to understand exactly what he was getting at in such uncertain times.

Haven’t you heard of that principle? he asked. I shook my head, no. I felt an immediate sense of guilt about everything in the world that I still didn’t know. Not to mention everything that I’d never get to know in the future. I’ve never heard of the three Ps, I said softly.

The friend tapped one index finger against the other, to lend force to his Ps. Pleasure, Prestige, Pennies. He said that two of these ‘conditions’ had to be met before he’d say yes to a client. Otherwise, it was no use to you, he said.

I looked at him wide-eyed. I always say yes. To everything. Clarice Lispector wrote: ‘Everything in the world started with a yes.’ And that’s the truth of it. Sometimes I forget that things don’t have to start at all. Not everything that’s possible actually needs to exist. Though I’m not sure that this is the moment I’d like to see mentioned in the history books as the one when I realised I could lay claim to a couple of the Ps. This is a privilege that almost no one can allow themselves now. Unless you’re organising the Grand Prix in Zandvoort, then you can ask others to make an appearance for less than one P. As long as you have enough pleasure, prestige and pennies yourself… Anyway, the Grand Prix has been discussed enough.

The friend and I were having a mug of coffee on his balcony. I find that with girls, I said. Now, he was the one looking at me, questioningly. I told him that for years I’d had three Cs in my head, if I liked someone: Cheese, Camping and Cats.

The friend looked at me in disbelief. Really, he said. But, at the moment, I’ve had to let go of that golden triangle, more or less out of necessity. So now, you’re left with hotels, hounds and hunks of meat, he asked? Something like that, I said. I told him that my love and I had been invited to spend the night at the Ambassade Hotel. That we’d been there just an hour when the telephone rang. I didn’t know that telephones could ring in the hotel, I said.

Who was it? he asked. I said it wasn’t important, only that I was so startled by the telephone ringing in the room that I realised I was someone who said yes to everything purely for pleasure.

That’s enviable, the friend said. I looked at his cat, which was balancing on the edge of the balcony. Yes, I said.