Marente de Moor (b.1972) lived in Russia for eight
years, shortly after the collapse of the Soviet Union.
Her books have won prizes such as the AKO Literature
Prize, the European Union Prize for Literature
and the J.M.A. Biesheuvel Prize. Her work has been
translated into more than ten languages. 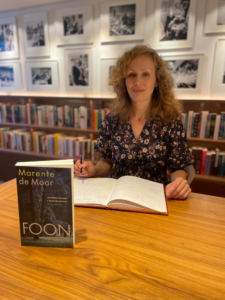 The Craving for Nest Renewal Behind the Dikes

When the restaurants closed, the Dutch got rid of their kitchens. Before the lockdown, the mattresses of rapidly departing expats could still be found among the garbage heaps outside; now it was floor cabinets, wall cabinets, kitchen worktops, the whole caboodle that any other people would be satisfied with. Get rid of it — time for something different. The craving for nest renewal is not only something of the present age per se — my grandparents also had their home re-wallpapered every five years — but the Corona crisis has added a desperate twist. If you’re digging in, do it well, as the people behind the dikes would say.

Six months later, I joined the lockdown refurbishers, too, with my sixth house move in ten years. Yes, it’s a neurosis. I move between the one book and the next, or I write between the one house move and the next — I can no longer say for sure because once the plaster has settled and the boxes have been unpacked, amnesia strikes, I can no longer remember anything of the misery; let-downs, backaches, leaks: gone. Rotten phrases like ‘extra work’ and ‘delivery time’ are out of your system. With every new renovation, I’m amazed. Because of the quotes and the bastards that draw them up. The Netherlands struggles with a great scarcity of handy-types. The bumbling plasterers, the plodding plumbers and the crass painters know this all too well. You could fill up a Suske and Wiske story with those people who come into your house, when you call construction workers in this market. My plasterer used Corona twice as an excuse to leave the mess of all messes, and to finally stop coming at all. The roofers, who drove 200 kilometres to take a look at my house, were familiar from TV. Quickly googling while they were still there, it turned out that there was an entire episode of Defrauded?! dedicated to them. Apparently, you can just carry on under the same company name in this country.

When I arrived dead-tired at the Ambassade Hotel, I remembered where I can always write well: on reading trips abroad, in the orderly comfort of a hotel room. Twenty square metres of refurbished four stars is everything that a writer needs, just ask Nabokov. Nothing is superfluous and everything works. The dust is wiped away for you; you can get straight to work. And now I noticed the perfect sealing, the installation of the bathroom facilities, I saw how the curtains hung, and I wondered why I could never manage that. I stumbled across a man downstairs,
built like a nail, wearing the black livery of the hotel. Toolbox, everything under control. So he’s the one I needed! But he wouldn’t work for me. He was part of the golden-section interior of the hotel. And, as always, I took the writing stuff with the logo in my case, hopefully. But, once home, the pen no longer worked.