Marjolijn de Cocq (b.1967) graduated in Translation
Studies in Amsterdam. Since 1994, she has worked
as a journalist. She reported on the Yugoslavia
Tribunal and the Lockerbie trial and led various
editorial boards at the GPD press agency. De Cocq
is the head of books and a columnist at Het Parool
newspaper and an author with the publisher
De Bezige Bij. 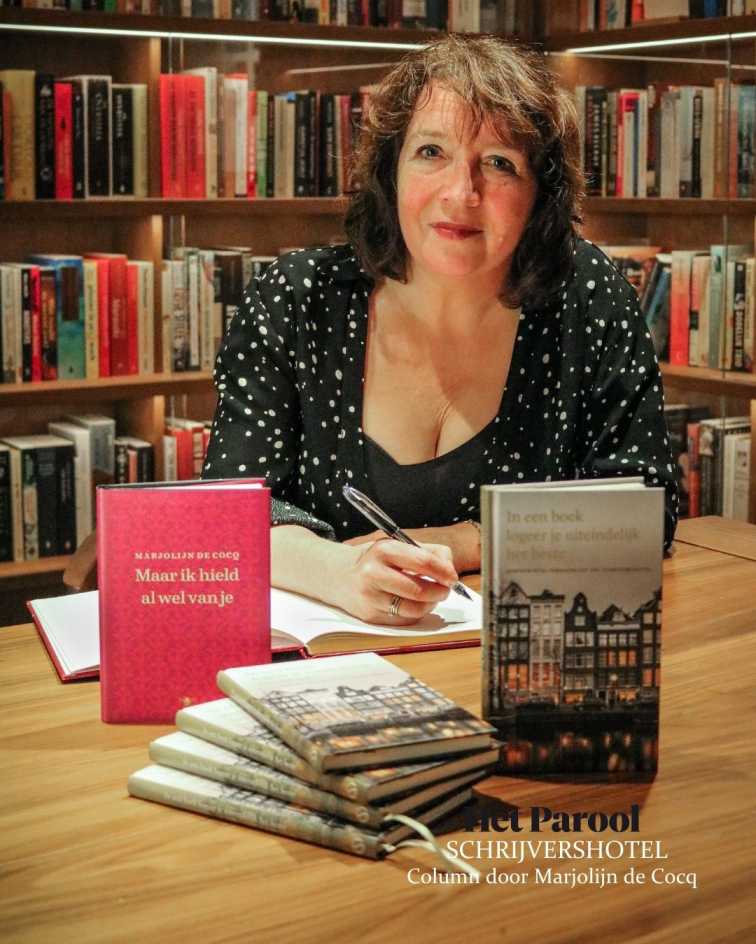 After the book launch of the Dutch edition of the bundled Writers’ Hotel columns, journalist Marjolijn de Cocq (the book coordinator of Het Parool) wrote an additional column. Please read her column below.

This extra column has been published in the English edition of the book. Both editions were published as promotional gifts and are not for sale in book shops. However, you are most welcome to read all twenty-seven columns in English on our website.

There is always the same sigh from photographers when another writer’s interview has to be done at the writers’ hotel. They’ve already used up all of the backgrounds and locations. The library, the brasserie, the blue salon. Every sofa and canapé. Every alley around the corner, every bridge over the canal. What else could they do now?

This was the case when I first came to the Ambassade Hotel more than twenty years ago, it was the same two years ago — and I can only hope that it will be the case again, sometime.

My first interview in the writers’ hotel took place around the corner from the entrance, in the lobby. It was 1998, and Arnon Grunberg was the author of the Book Week Gift. I was young, he was even younger. Last week, he was awarded the P.C. Hooft Prize, 2022, for his ‘novelistic universe’. He is still younger.

I know his favourite room number now. It was whispered to me last week by the hotel librarian, who curates the circa 5,500 signed books by their writer guests. I was briefly in there again. Because I’d been given the honour of accepting the first copy of an extraordinary collection.

The bookshops had closed during the winter lockdown early last year. Writers no longer had any tours, no readings, no signings, no award ceremonies. Let alone a Book Ball. And without writers, the writers’ hotel was no longer a writers’ hotel, when it had grown quiet and remained quiet even longer.

And so, a project was conceived within the walls of the Ambassade Hotel, under the working title Sheltering in the Writers’ Hotel. Writers were invited to come and stay, and to write about the effect of this stilled time on their writing lives. Unique stories were created, which each week found their way to the newspaper Het Parool to be the Writers’ Hotel column.

The launch of these collected columns was attended by a (very) small committee, with a (very) small number of followers online. Maybe, we thought, we’ll be able to hold a big party later, when it’s spring… My eyes flitted across the spines in the library, the titles calling to mind interviews from bygone years.

As the book coordinator of Het Parool, I was the cat with the cream once again this year. I travelled all over the world in books, unhindered. Hence the words that conclude Adriaan van Dis’s contribution, which are also the title of this lovingly produced book: ‘The best place for you to stay is ultimately a book.’