Pieter Waterdrinker (b.1961) is a journalist and
author of great, panoramic novels such as Lenin’s
Balsam, Poubelle and the successful The Long Song
of Tchaikovsky
Street. His latest novel The Rat of Amsterdam has been widely lauded.
His work hasbeen translated into English, German and Russian. 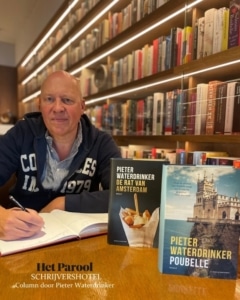 I grew up in a hotel. Are there any other hotel children in our national letters? There are certainly enough hotel people. With Arnon Grunberg as Joseph Roth’s ultimate standard-bearer. Although Roth was born in a house in Ukraine, he wrote, drank, and lived in hotels until his death. What is a ‘hotel person’? Ultimately, and I don’t mean this unkindly, it’s someone who allows themselves to be served.

Hotels, like seaside resorts, are places where people feel slightly detached, adrift from normal life, which is frequently a mess. Materially, existentially, erotically. Spaces to be filled in various ways. Fine material for novelists! We worked in the service industry in the small hotel, café, restaurant, reception room, and mostly ‘work-house’ that my grandfather began after the war. My three uncles, Jacob, Benno, and Simon Waterdrinker. And my father, who after years as a cook’s mate in the merchant navy to South America, got his own ‘fire’, or stove.

Hotel Zomerlust in Zandvoort. It no longer exists. Those were strange years. The years in which I grew up. One million… what am I saying? Six million wienerschnitzels, that’s what my father fried for German seaside visitors in the 50s, 60s, 70s and 80s. In theory, that was for the Wehrmacht soldier, too, who shot him in the leg when he was a boy in the Haarlemmerhout, in the final year of the war.

At the age when young writers these days can already boast of a prize-winning oeuvre, I was still washing plates, and cooking and serving in Zandvoort. In the meantime, I am now someone who is served. Perhaps that’s the only real transformation in my life: from server to served. But you never get used to it. I still turn my head away in slight embarrassment when a glass of wine, a cup of soup or a plate of pasta is set down in front of me. I never leave a hotel room without making my bed first, even though I know the chambermaid will be coming along in a little while with clean sheets. It’s a tribute to my mother. One million… what am I saying? She’s changed six million sheets in her life. Many small business people at that time were labourers for themselves.

Meanwhile, I’ve been ‘offshore’ for thirty years. What is Holland to me now? Apart from the cemetery of those I’ve loved? A hotel room. ‘Show me your hotel room, and I’ll tell you what sort of writer you are!’ In Moscow, Saint Petersburg, Baku, Grozny, Tashkent, Odessa, Yalta and other places, I grew accustomed to the sumptuous luxury of hotels on my work trips. But once back in Holland, a gammy guest bed or a low-class hotel would be waiting for me. It took about seven novels before publishers, patrons and programme makers in the fatherland greeted me with a hospitality that is usually only reserved for foreign writers. And so, dear reader, I ended up at the Ambassade Hotel in Amsterdam. My home in the Netherlands. The only one. Reason enough to make the literary fire smoke, roar and crackle.