Ronald Giphart (b.1965) debuted in 1992 with the
novel I Do Too, an instant classic in Dutch literature.
Giphart received the C.C.S. Crone Prize in 2004 for
his oeuvre. In 2021, his novella Applause: Love in the
Time of Corona was published, intended as an ode
to the care and support of local bookshops. 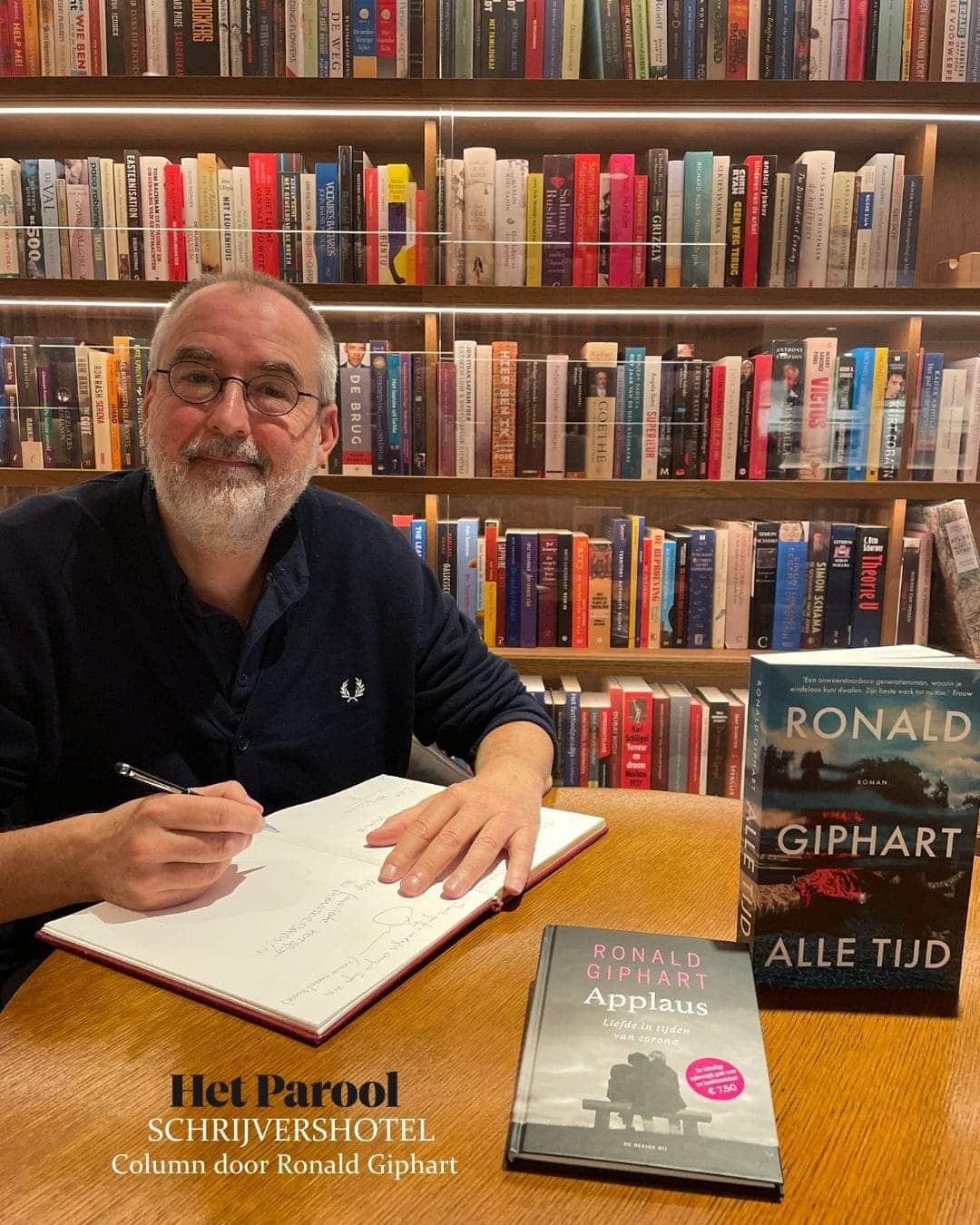 Until 2011, the Hotel Chelsea in Manhattan was the illustrious meeting point for hundreds of artists, actors and musicians. Madonna lived there (Room 822), Leonard Cohen (424) and Janis Joplin (411). Sid Vicious’s girlfriend was stabbed to death there (100), and The Sex Pistols’ bassist himself died of an overdose (also in 100).

Artists such as Christo, Robert Mapplethorpe (1017), Willem de Kooning and Andy Warhol paid for their stays with works of art, paintings that were hung all over the hotel.

Numerous writers bivouacked there: from Mark Twain to Jack Kerouac, from William S. Burroughs to Jan Cremer (who lived there for quite some time), from Arthur Miller to the Welsh poet Dylan Thomas (Room 205). When the latter returned one evening in 1953 from The White Horse Tavern, his nearby local, he died from the eighteen straight whiskies that he’d just drunk.

It was a pilgrimage to Dylan Thomas that brought my friend Dylan van Eijkeren (known from the newspaper Het Parool) and me to the Hotel Chelsea in the mid-90s. We were actually able to book room 205, at least that’s the story we told everybody later (in reality we stayed in room 434).

The Chelsea was everything I’d imagined it would be: the lobby was hung with works of art, the hotel was populated by a motley gathering of eccentric weirdos, and behind the tiny reception desk sat two men twenty-four hours a day in turbans, both named Singh.

In the aeroplane to JFK, Dylan and I had met two Dutch girls, and when we said goodbye at the airport, Dylan called out that we’d see each other at ten o’clock in The White Horse Tavern. This was before the mobile-phone age, so we had no idea whether the women would actually show up. They did, and ultimately Dylan and one of the girls would hook up.

The three of us ended up at the Chelsea. But as I didn’t feel like lying in my queen-sized bed listening to the playful exchange of genetic material in the bed next to me, I decided to take a nap in the lobby with the Singhs, lying on one of the old couches that Jimi Hendrix had once sat on (there are even photos of it). I asked the receptionists if I could rent an extra room, but sadly the hotel was fully booked that night.

After I’d explained my awkward predicament, they glanced at each other and sympathetically shook their turbans. One of the Singhs stuck his hand into a drawer and gave me a key to an unappealing little staff room with a bed on the twelfth floor. Later, I’d often claim that Mark Twain had once stayed there, but that probably wouldn’t be true.