Roxane van Iperen (b.1976) is an author and jurist.
She debuted in 2016 with Scum of the Earth (Hebban
Debut Prize), followed by The High Nest in 2018
(published internationally as The Sisters of Auschwitz),
which has already sold more than 200,000 copies.
In 2021, Van Iperen wrote the Book Week essay
The Genocide Fax, and delivered the 4 May reading.
In 2021, she published Letters to the High Nest. 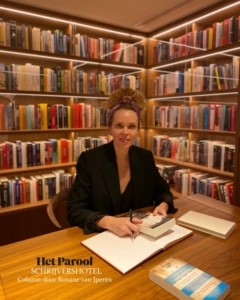 The most beautiful child in the world was born sixteen years ago in Amsterdam. It was the month of September, and the city was showing itself off in its Sunday best, in anticipation of her arrival. The nervousness of the summer had evaporated, but a blanket of warmth remained. Instagram didn’t exist yet, otherwise countless photos and films would have travelled around the world of canals rippling in rosegold light and cyclists in shirt-sleeves.

With my bottom in the grass and my gaze turned inwards, I shared my impatience with the trees in the Sarphatipark. Each day they changed colour like a lava lamp as we counted down together, ready to let go. On the second Tuesday of the month, when the newspapers wrote that rich and poor countries were quarrelling over the abolition of trade-distorting agricultural subsidies, and eBay paid a sum of 2.6 billion dollars for the acquisition of Skype, the most beautiful child in the world was born in a delivery room in the VU Hospital on De Boelelaan 1117. All of my boyfriend’s colleagues, who worked in the gynaecology department, came out to admire her. My knees were still up beside my ears, but they meant well, and I realised that decorum was the least
I had to lose from now on.

The most beautiful child in the world has turned sixteen and is walking along the canal with her friends on a lovely autumn day. It is always warm on her birthday, although you should never trust eye-witnesses. I sit on the terrace of the Ambassade Hotel, on the other side of the canal, and stare at them as they go. Bony bodies like foals, and childlike motor skills, which I know they will adjust in the shop windows between the Wolvenstraat and the Berenstraat, with inhibited self-consciousness. In the basement of the vintage store, Episode, they will rummage through the racks, apparently bored, and then spend their salaries on something that’s been lying neglected in my closet since 1998.

In the evening, we sit on her bed and watch an episode of Sex Education, in which a class of teenagers with weltschmerz are travelling to France on a school bus to the strains of La ballade des gens
heureux. A teacher is trying to encourage a boy who’s just been given a bad fail. ‘Everyone is good at something; you just have to find out what.’ ‘I’m good at imitating Gandalf from The Lord of the Rings,’ he answers. The awareness dawns on him that what adults have been telling him all this time is an illusion: that everything is possible and the world is waiting for him.

I look at my daughter in her third-hand sweater, which she wears with the allure of a film star, and I know one thing for sure. As long as I’m the world, it will be true.