Stine Jensen (b.1972) is a philosopher, writer and programme
maker. She writes philosophical children’s
books about such issues as feelings, child rearing,
saying goodbye, identity and happiness. She also
writes books for adults, such as the recently published
Daring to Fail and Other Philosophical Contemplations.
Her children’s book Dear Stine, Do You Know? won
a Silver Pencil award in 2015. 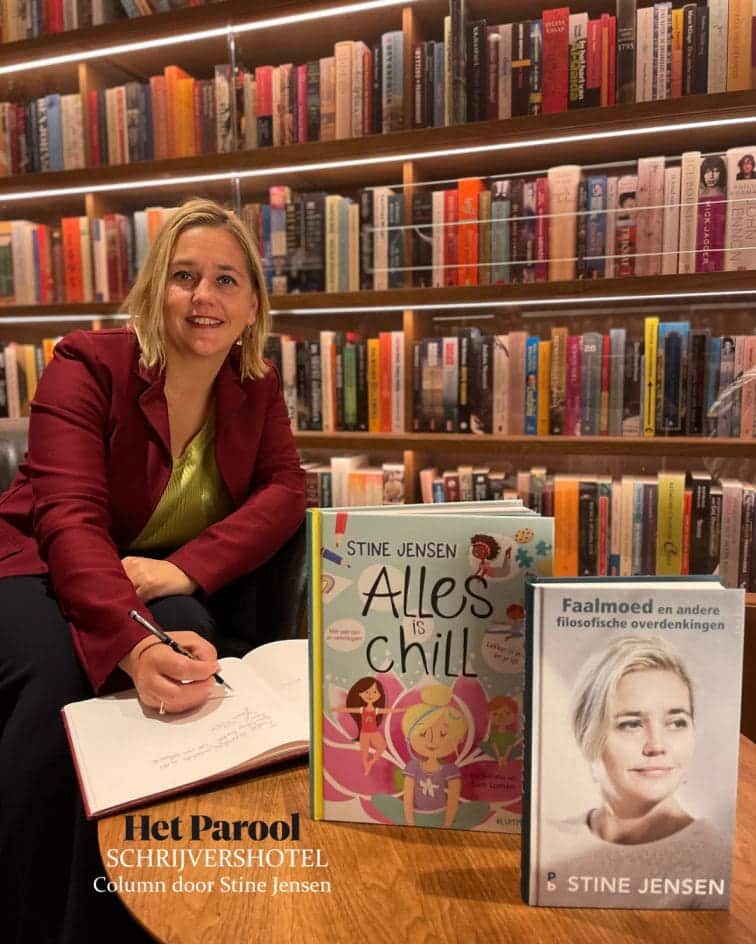 What a feast! What a plunge! For the first time in ages, I go to a theatre performance. I’ve been looking forward to it, yearning for it even, because my favourite book, The Hours by Michael Cunningham, is being staged in Dutch. The book interweaves the lives of three women: Virginia Woolf at the end of the 1920s in London, Laura Brown in 1949 in Los Angeles, who reads Virginia Woolf ’s Mrs Dalloway in bed, and the New York publisher Clarissa Vaughan at the end of the twentieth century, who is organising a party for her boyfriend, Richard. He calls Clarissa ‘Mrs Dalloway’ because she has the same Christian name as Woolf ’s Mrs Dalloway. The Hours is a complex, post-modern novel, full of allusions. I find it such a wonderful book because it shows how three women, all born in another time, wrestle with the same questions. Have I made the right choices in life? What is important in life? As a woman, can you derive pleasure from ‘banal’ things like baking cakes and buying flowers, or do you want to do other things such as write books, or poems?

The Hours on stage is a challenging undertaking for another reason. After all, there is a superb film version of the book that a lot of people have already seen. The three lead actors, Nicole Kidman, Meryl Streep and Julianne Moore were jointly awarded the Silver Bear in Berlin for the best female actor. How can you break free from that famous film?

But something magical happens in this stage performance, directed by Eline Arbo. From the first minute, she grabs all your senses. The actors are stood on a revolving platform; it’s a daring exploit in itself, standing on a revolving platform for two hours. At a few spectacular moments, the women walk nervously, irritated or even bristling with energy through the city, and the speed at which the platform revolves increases. What a feast, what a plunge…!

The Hours on stage is phenomenal, wonderful, unique. But I’m not yet entirely convinced because I wonder whether my favourite quote has been included? Yes, luckily: ‘There’s just this for consolation: an hour here or there when our lives seem, against all odds and expectations, to burst open and give us everything we’ve ever imagined, though everyone but children (and perhaps even they) knows these hours will inevitably be followed by others, far darker and more difficult. Still, we cherish the city, the morning; we hope, more than anything, for more.’

I once met the writer, as it happens. Michael Cunningham was staying at the Ambassade Hotel — where else? He had many female fans, and told me that he longed for the gaze of men. He went into the city. He was ready for a plunge.