Susan Smit (b.1974) is a writer and columnist. She
debuted in 2001 with Witch and currently has eighteen
successful books to her name, including the bestsellers
Gisèle, Bride of the Tropics and The Witch of
Limbricht. 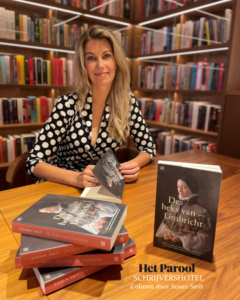 Six Years Stuck in the Jungle

If you’re as nostalgically disposed as I am, the renovation of a place on the street, or a building that you often visit, can feel like a personal offence. The desire for renewal feels like a satirical mocking of all the experiences that you’ve had there, and which are preserved between the woollen threads of the carpet, and the crannies of the window frames. They escape and evaporate with the sanding of the wood, the vanishing of the furnishings and the plastering of the walls. Doomed are the melancholics, because everything falls apart and acquires a new form. Each attempt to hold on only leads to cramped hands.

The old tea salon on the first floor of the Ambassade Hotel. Writers were once interviewed there about their latest book; now hotel guests dine and breakfast there — like me, today. I can remember the trolley filled with tea and delicacies that was wheeled in, and the pendulum of the grandfather clock that was standing there, and which someone had held to prevent its ticking in the TV recordings. The chandelier is still there, as I see to my relief.

The nicest meeting I ever had in the tea salon was twenty years ago with the Colombian presidential candidate, Íngrid Betancourt, who had published an autobiography. I can still see her sitting on the velvet settee by the high windows, with her fragile form, gentle radiance and an iron determination to bring an end to the corruption in her country. She described anger as her primary source of strength. Bodyguards were posted everywhere, and yet she still stiffened when a door banged shut.

Three days after our conversation, she was dragged from her car and kidnapped by the FARC. She spent six years in the Colombian jungle. During those years, I couldn’t cycle past the hotel without seeing her before me for a moment. Could she still be alive? Would she still have her fighting spirit?

Betancourt escaped from the hands of her captors, made a hellish journey through the jungle and reunited with her family. After she had written a book about her abduction, I met her again, on the same settee. The combination of gentleness and combativeness that she had radiated remained, but this time it was lived. Re-won. She’d learned to understand her captives, she said, not because she agreed with them, but because she’d grown conscious of the complexity of being human. ‘I saw compassion in a new light,’ she said, ‘as an essential value.’ It turned out to no longer be anger that kept her going, but compassion.

Everything falls apart, acquires a new form. Then it falls apart again.