Tommy Wieringa (b.1967) is the author of books
such as Joe Speedboat (F. Bordewijk Prize), Caesarion
(shortlist International IMPAC Dublin Literary
Award), These are the Names (Libris Literature Prize)
and The Blessed Rita (BookSpot Literature Prize).
He was nominated for the International Booker Prize
for The Death of Murat Idrissi. 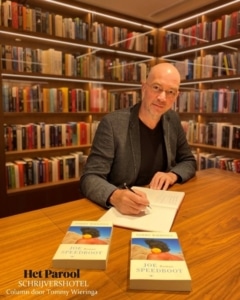 There are two gentlemen in their mid-sixties sitting at a table by the window. They’re praising the view and the wine. The view: the canal, the elms, the houses on the far side. The wine: Apostelhoeve Cuvée XII, 2019. They study the label at length. Such a lovely, bone-dry, home-grown wine, their amazement doesn’t cease.

They know many of the same people, the oil of their conversation. What a pleasant subject of conversation it is, an acquaintance who failed in both his career and his marriage; and doesn’t their pity for his failure feel good and warm. ‘And, naturally, he had the bad luck that his parents have grown to be so old,’ one of them says. The other agrees. ‘If only one of them would die, then something might fall his way for once, eh.’

But they were bathed in the comfort of their own investments. This included their marriages: an investment that paid out in children and grandchildren. Not everything turned out equally well, take the apartment in Bangkok. The man sighs. ‘You can’t speak the language, the jet lag gets worse and worse, especially when you travel from west to east.’

So, they sold it and bought something in Dubai instead. From north to south is better. ‘It’s twenty-four degrees there now, and you don’t pay a cent in salary tax, or income tax. Ideal.’

The other had bought an Amsterdam apartment for his son for 350,000 euros, and recently sold it for half a million. You’re robbing yourself if you don’t.

Two men, spreading in the autumn of their lives. They’ve managed to get the best out of things, there’ll never be another generation that has it better. Fortune was their just desserts; ill fortune would have been dumb bad luck. And how they’d leave the world behind them wasn’t their concern. ‘Lord, give me the confidence of a mediocre white man,’ a Canadian writer lamented on Twitter a couple of years ago. A sentence that took off;

today, too, it iswritten in invisible ink above a table by the window of the hotel restaurant.

‘It’s a lovely city when it’s like this, eh?’ they say to each other, their eyes on the Herengracht.

Yes, a lovely city, I concur in silence. But so uncertain, because this week the papers are full of the results of the big climate report. And ever since, the water has been seeping over the edges of the quaysides, the pavements, the steps of the canal-side houses. These rooms, everything that we’ve built. This hotel, where it’s already risen to the first floor. When the flood comes, it will splash against the ceiling. I open the hotel Bible in bed, with the sea around the bed’s legs. People: their days are like the grass, they bloom like flowers in the open fields; then the wind blows, and they’ve disappeared, and no one knows where they ever stood.