A collection of more than
5000 signed books

In the Library Bar you will find a unique collection of signed books by authors who have all stayed at the Ambassade Hotel: more than 5000 of them.

The Ambassade Hotel has traditionally maintained close links with publishers in Amsterdam and the surrounding areas. Many of these publishing houses as well as some of Amsterdam’s best-known bookshops and authors’ cafés are located within walking distance of the Ambassade Hotel.

Famous authors who stayed with us are: Umberto Eco, Salman Rushdie, Paul Auster, Isabel Allende, Jonathan Safran Foer, Nathan Englander and almost all the Nobel Prize winners for literature over the past few years including V.S. Naipaul, Toni Morrison, Mario Vargas Llosa, Herta Müller, Günter Grass, Orhan Pamuk and José Saramago. Not to forget, of course, that Dutch authors are also represented in the collection. For example, Jan Siebelink, Arthur Japin, Hella Haasse and Gerrit Komrij, who stayed with us very often.

Since the mid-1980s, it has been tradition to invite authors during their stay at the Ambassade Hotel to sign a copy of their most recent book and to write a few words in the guest book. Apart from inscriptions by authors, this book also contains entries from musicians, actors, painters, philosophers, architects and politicians, who often stay at the hotel at the invitation of cultural foundations.

The collection in the Library Bar has meanwhile been built up to more than 5000 copies of works by authors from 76 different countries. The collection is in the main made up of literary works, but books on the most diverse topics can also be found there. The guest books are kept in a separate section of the bookcase. On request, guests may have a closer look at the books and the guest books. In the guest books you will find the most beautiful, inspiring quotes and dedications written by all the famous guests that stayed in our hotel.

It may be due to its lasting literary tradition that the Ambassade Hotel itself is featured in a number of novels, among them “The Museum Guard” by Canadian author Howard Norman and “Tod eines Kritikers” by German author Martin Walser.

Of course, the Library Bar also lends itself to a business meeting, to relaxing with a drink or to reading a newspaper or magazine.

A very special one is this quote from a famous author who stayed with us several times:

“The Ambassade Hotel is the
reason we write books” 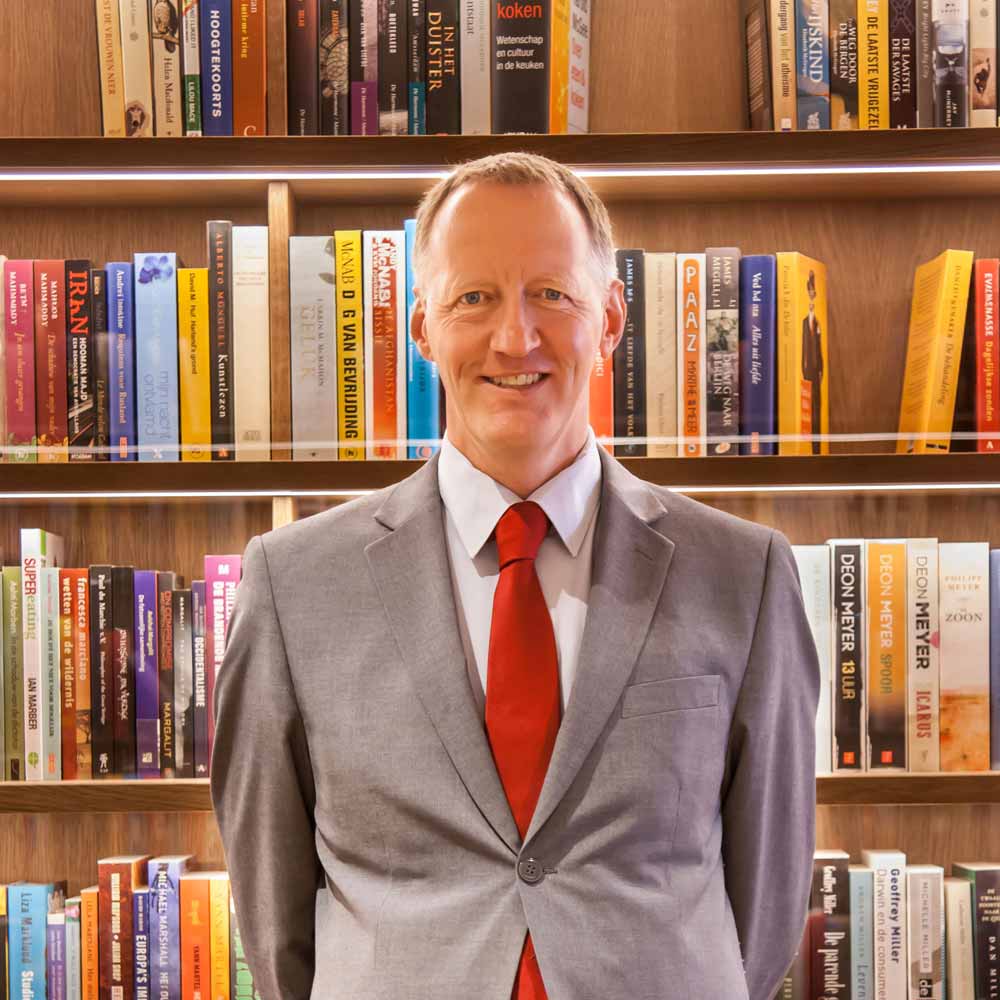 About our librarian Eelco Douma

Already since my childhood I am avid reader of literature.  After graduating in Geography at the University of Amsterdam in 1994, I started working at the Ambassade Hotel.

I soon found  the good relations with publishers and literary institutions that the hotel has very inspiring.
Hired as reservations-manager I began getting more and more involved with this literary aspect and eventually became the direct contact for publishers and writers who stayed at the Ambassade Hotel.

It’s a great part of my job to welcome the authors and to ensure that their press visits run smoothly.

At such a visit the hotel traditionally receives a copy of the book, signed and autographed personally by the author.  Besides that we ask him or her to write a few words in the hotel’s guestbooks. These guestbooks have grown into a fascinating account of more than 30 years of literary history of the Netherlands and the Ambassade Hotel.

Around the turn of the century our collection of signed books did become so extensive that the hotel was able to set up a library which actually consists entirely of autographed copies from authors who have been invited to stay at the hotel.

The hotel’s owner asked me at that occasion to manage the book collection in addition to my duties as a reservations manager, and so I was appointed librarian of the Ambassade Hotel.

Ever since, I practice this honorable function with great pleasure. During the 2014/2015 renovation of the hotel, the Library merged successfully with the new designed hotel bar.

In the meantime the collection of books has grown to more than 5000 titles, including some from my favourite authors such as Rupert Thomson, José Saramago,
Ian McEwan and Dimitri Verhulst.

Contact with publishing houses and related cultural institutions is always very pleasant and I am most grateful because thanks to these, the Ambassade Hotel has become “the” literary hotel of the Netherlands.

It is wonderful to work between books by great writers and often it makes me feel humble, like the main character in Haruki Murakami’s novel Kafka on the Shore: “the stars are like the trees in the forest, alive and breathing…, and they’re watching me. “

Publishing Houses in the centre of Amsterdam with whom the Ambassade Hotel has a long-term relationship are:

Two of Amsterdam’s most famous bookstores are situated just a two-minute walk away from the Ambassade Hotel:

Scroll to top
Curious about our tips for favorite spots & activities in Amsterdam?